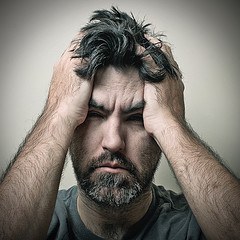 Is your wife in love with another man? Does she continue pushing you away and defiling your marriage?

Are you worried that you won’t be able to survive her emotional affair?

Whether or not your wife is aware that you know about her infidelity, if she continues to involve herself with another man, then it’s going to take an immense amount of strength and endurance on your part to save the marriage.

As you continue reading, you’re going to learn 6 simple steps to ease the pain of your wife’s emotional unfaithfulness.

These are the steps I wish I’d known when I was facing emotional infidelity, back in the relationship I had before meeting my wife. Even though I still would’ve left the relationship, they may have helped maintain my sanity. Never quite got all of that back ;-)

There is a huge amount of emotional turbulence that comes with any kind of infidelity. I’m willing to bet that you’ve spent hours and hours worrying about your wife, your marriage or what you could have done to prevent her emotional affair. Maybe all of the above.

You’re frustrated, you’re tired, and you don’t know where to turn.

So, stop for a moment…

Get your head out of the muck…

You’re still alive. You’re not divorced. But you are unhappy.

It’s time to talk about you. Because after all, YOU are the only one that you can control.

You do want control of your life again, right? I’m willing to bet you haven’t felt that in a while.

You Need a Plan to Survive an Emotional Affair

Moving forward without a plan is foolish. You can’t go into the future blind. Surviving an emotional affair isn’t something you do by the seat of your pants. Develop a plan of action for yourself (not for your wife), and then follow through with it.

What follows is a 6-step plan to survive your wife’s emotional affair without losing yourself to desperation, guilt, anger and depression.

Step 1.
Understand Why She Continues to Want Him

The first step is understanding why your wife cheated. And no, contrary to what she’s telling you, it’s not your fault.

Your wife’s emotional affair is now an addiction.

But however you look at it, nothing changes the fact that right now your wife is literally addicted to another man. And like any addiction, an emotional affair will be difficult for her to break free from. And also just like any addiction, the best approach is cold turkey.

Psychologists call this state of romantic addiction “Limerance“, and I’ve written more about it in this article about What Is an Emotional Affair.

Your wife began a relationship with another man because he paid attention to her. However, the reason that she can’t stop is because she’s unable to let go of how he makes her feel.

Again, I cannot stress enough that there’s no excuse for cheating; this is just meant to help you understand what your wife is going through.

If you want more help with this step, check out this quick guide to help you get over your wife’s affair.

Step 2.
Don’t Be the Victim

This step to survive an emotional affair is perhaps the most important.

Now that you understand why your wife continues to be involved with another man, or why she was involved with him for so long, it’s time to let go of the self-pity and self-blame.

You are NOT the reason that your wife cheated!

Even if you weren’t being the best husband before she became involved in an emotional affair, the vows of marriage mandate that all problems be dealt with through the spouse, not through an attractive friend. For her to confide in someone other than you is blatantly unfaithful.

Furthermore, it drives a wedge into your relationship. So many women complain about their husbands, then go off and do everything in their power to make their husbands even less appealing. Of course she’ll find it easier to talk to a man whose only concern is getting in her pants, than to her husband who wants to delve into a fiery furnace of marriage problems.

In short, it was her decision to flee from the problems in your marriage. It was her irresponsibility, her betrayal, and her unfaithfulness that led to her emotional affair, no matter how accidentally or innocently it began.

She’ll probably tell you that you were “cold”, or that she felt like she couldn’t talk to you. Or maybe she’ll say that the marriage was going downhill anyways.

Don’t let yourself believe these lies. There’s a term for this too; it’s called blame-shifting.

Just like any other addict, your wife will refuse to acknowledge her part in the emotional affair. The worst thing you can do is play into her denial by allowing yourself to believe that her emotional infidelity is in any way your fault.

It may not be much consolation now, but rest assured that your wife will actually be the one who ends up with the most pain because of her emotional infidelity, at least in the long run. Especially if it costs her the marriage.

Step 3.
Stop Being Her Safety Net

An addict won’t do anything about their addiction until it hurts more to continue than it does to stop.

That’s just the way it is.

It’s time to put your foot down.

The reason that your wife continues her emotional affair is because you’re giving her a safety net. She knows that if she ever falls out of favor with this other man, she always has you to turn back to. She is living without consequences, and she knows it.

This simultaneously pushes her to desire the other man more and takes away her incentive to come back to you.

Stop being her safety net. Make it clear that you won’t allow yourself to be treated this way, and that if she continues her emotional affair then you will leave. And you have to mean it, too.

I’m telling you this man-to-man:

You deserve better than an unfaithful wife.

That’s not to say you should abandon your marriage, but until you value yourself enough to draw the line, there’s no hope of surviving her emotional affair. In the end, your wife was the one who broke your trust; it’s not your responsibility to fix it.

At some point, she’ll have to prove to you that she is sorry for her sins and that she wants to save your marriage. The longer you remain in the background as her safety net, the longer it’ll take for her to change and the deeper into her affair you allow her to get without any consequences.

This is something I’ve talked about a lot on Husband Help Haven – The best way to get your wife back is actually to let her go (and stand on your own two feet without her). This also applies when learning how to survive an emotional affair.

Right now that anger you were feeling earlier is starting to get mixed up with fear.

But guess what? As of right now…

The worst has already happened… There’s nothing left to be afraid of!

That’s not to say that these things can’t change in the future, but relying on the future for your happiness now is foolish and self-defeating.

Remember, YOU are the only one that you can control. So start taking control.

Step 5.
Recognize What Needs to Happen

One of the other articles in Emotional Affairs 101 is called How to Permanently End an Emotional Affair in 6 Steps. In it, you’ll find a series of steps that your wife must complete before your marriage can be saved. I highly recommend you read through that article so that you can gain a clear recognition of what needs to happen on your wife’s part for things to turn around.

The answer isn’t waiting around for her to come back to you, or just assuming your marriage will recover. No matter how much pain you feel now, the depth of your shattered trust for your wife has only begun to show itself.

As I said before, your wife is the one primarily responsible for fixing her mistake. But even though it’s her responsibility to take action and fix it, you can still lead her in how to do so.

Step 6.
Have Hope!
Your Marriage Will Be Better for It

The last step is a step towards hope.

Even though your marriage may be closer to divorce than it’s ever been before, there’s a silver lining…

If your wife can beat the odds and turn a new leaf… If you can forgive her emotional affair and let go of the pain… Then your marriage will be the best it’s ever been!

There is a light at the end of the tunnel. This painful time in your life won’t last forever.

Either your wife repents and your marriage will be reignited with a primal attraction that’s never been present before. Or, she doesn’t and you live on and find happiness on your own. Obviously, you probably prefer the former of the two, but recognize that you will be happy either way.

You can tell yourself that you’re going to start laying down the law all you want, but if your actions don’t match your words, nothing is going to change.

You must put your foot down, and you must be forceful about it.

For example, don’t just say you’re going to take away her safety net… Actually do it. It’ll be hard, but it’ll be worth it too.

Don’t be afraid to set a hard deadline by which your wife needs to come around by. If your wife insists on staying involved in her emotional affair and can’t/won’t let him go, there’s a certain point where you just need to say, “That’s enough.”

You can’t expect to survive an emotional affair forever.

Remember, nothing will be different until it hurts more for her to continue the emotional affair than it does to change. Don’t bend over backwards thinking that’ll get her back… Let her know that you’re through playing the games.

Final Warning:
Your Wife Must Commit

Before I let you go, I have one final warning for you.

No matter what your wife says to you, no matter how much she blames you, she is the one that cheated. You can be patient, you can be respectful, you can be forgiving, but don’t forsake your self-worth or your dignity, and don’t be afraid to set boundaries.

And no matter what happens, I’m in your corner.