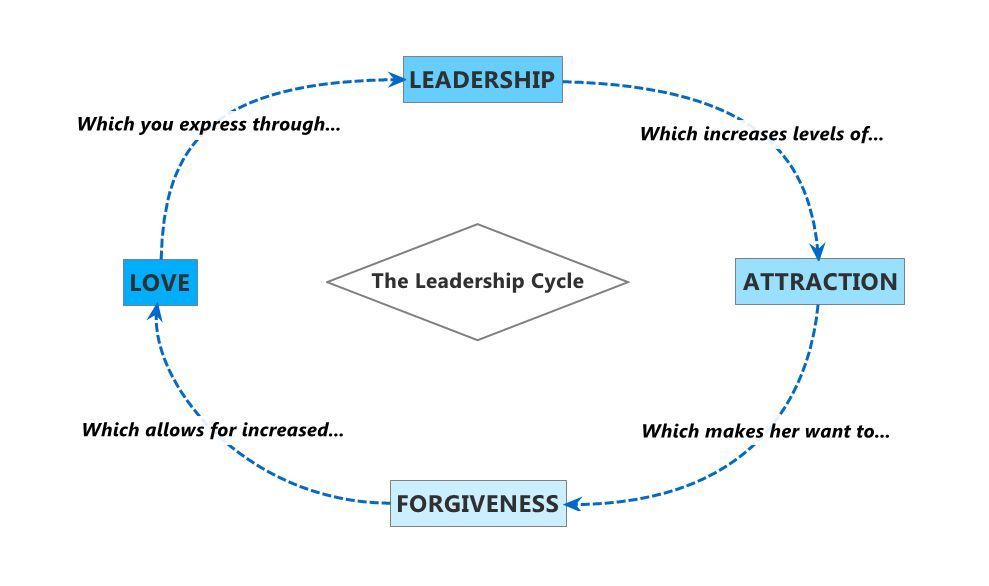 Because you're a Havener, you already know that leadership is important.

You've heard me say it a million times...

The only way she wants to stay in the marriage is if she's ATTRACTED to you...

And LEADERSHIP, above all else, builds attraction.

And yet, this doesn't quite tell the whole story...

For many years I've tried to explain why leadership is crucial, both in enjoying happy marriages and repairing damaged ones. I've struggled to explain how exactly it relates to the other elements that are really and truly required in a marriage, like love and trust and forgiveness.

For a long time, husbandly leadership was one of those things that I knew in my gut was important, but I didn't understand why beyond the simple fact that it builds attraction.

Surely, there’s something more to it, right?

There is. Introducing... The Leadership Cycle (see above)

It’s not the best looking diagram in the world (after all, I made it myself), but it does explain what happens when leadership is present in a marriage.

We’ll refer back to The Leadership Cycle a lot throughout Manly Marriage Revival, so let’s go through each section of this diagram one at a time.

This is the section of the diagram that you’ve probably heard the most about, especially if you read the 10 Steps to Gain Husbandly Leadership.

What I want to clarify here is that attraction is NOT just physical.

When we think of a woman being helplessly attracted to a guy, many of us envision a man with 8% body fat and six-pack abs. Or maybe we envision the guy from 50 Shades of Grey – a rich bad boy that women can’t resist. 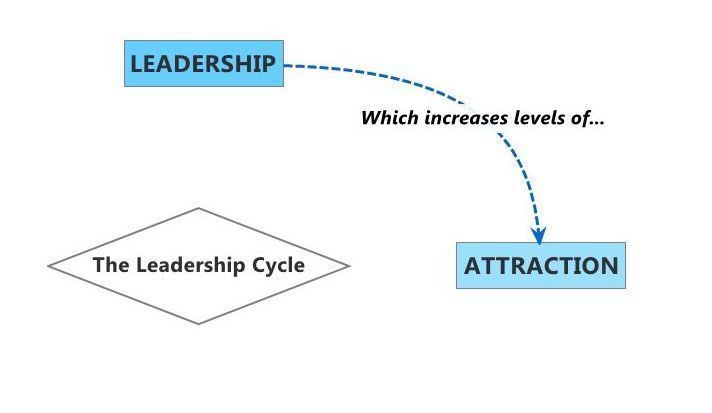 In a marriage, attraction is more than just physical; it’s emotional and mental too. When your wife is attracted to you, it’s not because you’re physically attractive; it’s because she sees you as a man worthy of her time and respect. This is the kind of attraction that lasts a lifetime.

This is good news for us, because it means that you don’t have to be in the best shape of your life to get your wife back. Attraction has nothing to do with your fitness or how much money you make. Instead, it’s all about your leadership. When you have the attitude of a leader, your wife can’t help but respect you; you’ll pique her interest. 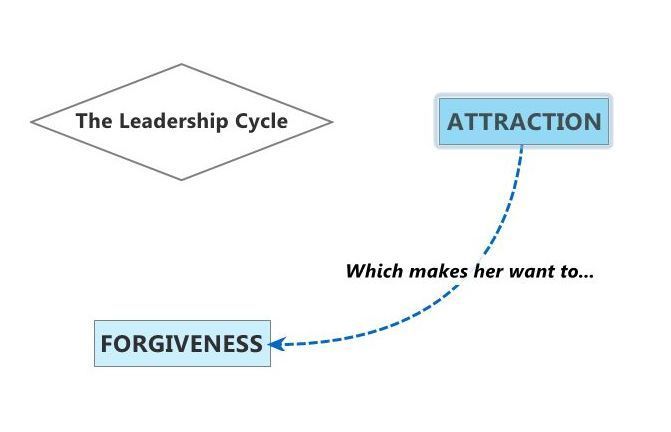 In other words, when your wife is attracted to you, it's much easier for her to WANT to forgive you.

To see proof that attraction incentivizes forgiveness, just look at any abusive relationship…

You know those couples where the guy is a huge ass hole, but the girl stays with him no matter how many times he screws her over? That’s because she’s attracted to him, and that attraction enables forgiveness.

This is a really depressing example, and I’m NOT saying that those types of relationships are healthy. They’re not; they’re highly dysfunctional. Being a leader doesn’t mean being an inconsiderate ass. The point here is that if our imaginary girl wasn’t attracted to that guy, then she’d leave him in a heartbeat. But because she is attracted to him, she’ll continue to forgive him time and time again.

That’s why I used the word “incentivize” in the subheading here. When your wife is attracted to you, she has an incentive to forgive you. That incentive is getting to stay with a man she finds attractive.

This step of The Leadership Cycle is why I spend so much time talking about attraction, and it’s why attraction is the only thing that can keep your wife in the marriage when she otherwise wants out. Attraction incentivizes forgiveness.

This is the part of the diagram that we haven’t talked as much about...What happens after you’ve mastered husbandly leadership and rebuilt attraction with your wife?

What happens after your wife decides to forgive you?

When your wife makes either a conscious or subconscious decision to forgive you, she opens up her heart. She is saying, “I’ve seen you at your worst, and I accept you as you are.” 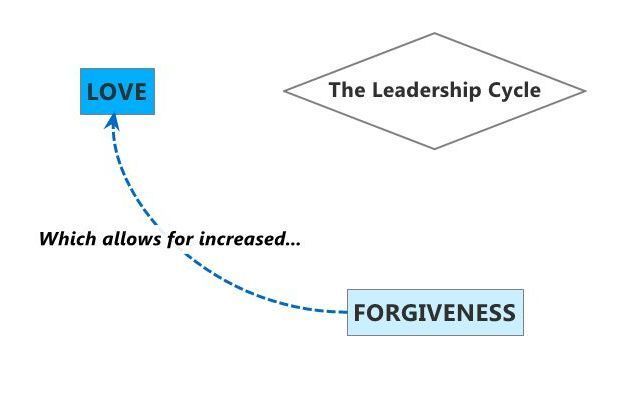 Note that this is the part of The Leadership Cycle that’s missing in those abusive relationships we talked about earlier. The unworthy man takes his forgiveness for granted because he doesn’t actually love his woman; he only loves himself. Similarly, the woman’s forgiveness of her man doesn’t lead to increased feelings of love, but instead to increased feelings of fear.

Love Enables You to More Confidently Lead
(and the cycle continues...) 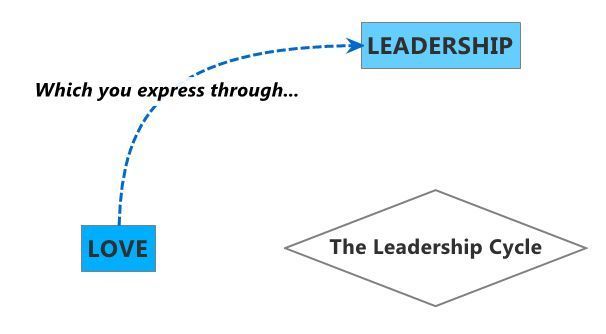 Leadership is the hardest when you’re all on your own. When you don’t have your wife’s love and support, leading your marriage feels a lot like trying to push a boulder uphill.

However, once you make it all the way through The Leadership Cycle – once you’ve built attraction, incentivized forgiveness and allowed love to grow – leadership becomes self-sustaining.

This step is the goal. This is what we’re working towards. This is why husbandly leadership is the safest way to guarantee a happy and fulfilling lifelong marriage… The more times you go through The Leadership Cycle, the easier it is to maintain the cycle in your marriage.

This step of The Leadership Cycle also illustrates a very important concept about love, which is that leadership is how you express love as the husband. We’ll talk more about this in the next chapter of the course, Manly Marriage Revival.

... Then you'll love Manly Marriage Revival. This post highlights only a small part of the first chapter, and it barely scratches the surface of everything you'll learn about husbandly leadership in just the first third of the course.

Want to learn more? Just hit the button below: