Normally when you read a post like this, you’ll hear about all the awesome things that happened in the past year, how great it was and how many things went right.

I’m going to be completely honest with you guys:

My wife and I faced more trial, failure and loss this year than either of us have faced in our 27 years of life.

We’re on the other side of the valley now (I hope). Things are much better.

But man, what a tough and long season of suffering this year has been.

Stephen's note: This blog post is 100% personal update, and fair warning – it’s kind of a downer. There’s no marriage advice here except what you can learn from my mistakes. I won’t be offended if you skip this post and wait for the new one next week. For the rest, here’s the nitty gritty details you’ve been waiting for.

There were three major sagas that took place this year.

You may remember from the beginning of the year that my wife and I hoped to eventually adopt a foster boy referred to as M.

Unfortunately, M was removed from our home at the very end of June.

He lived with us for about 7 months (Dec '16 through June '17), and in that time he became steadily more and more aggressive with Kalee. The worst came in June when we had to call the cops after he started hitting her. She wasn’t seriously injured, a couple bruises on her arms, but that crossed a line.

That week, the people working behind the scenes (case worker, GAL, judicial officer, etc.) met and decided that the possibility of adoption was not worth putting my wife and 2 year-old daughter in danger.

He was removed from our home and returned to a residential facility that same day. 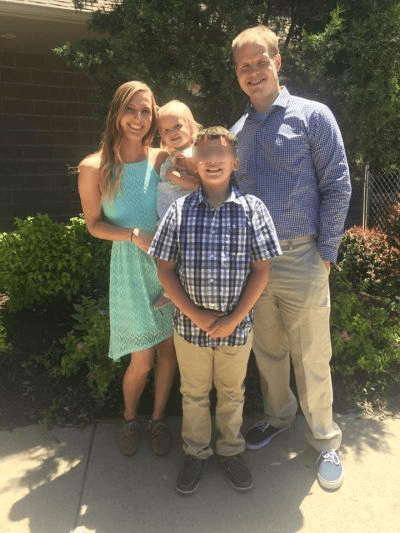 Photo taken on Mother's Day of this year

Honestly, even before the violence escalated the way it did, we’d already agreed we would request M to be relocated from our home before the next school year. It just wasn’t working.

For months we’d been dealing with at least six or seven aggressive, violent, long-lasting tantrums every single week. I remember counting 13 ‘tantrum days’ in a row one time. There were maybe two meltdown-free weeks in 7 months.

These tantrums were almost always directed at my wife, and their intensity kept rising.

We began to live in dread, always walking on egg shells. Everything in our life was getting worse and worse and worse… My business, our marriage, our family, ourselves individually, Kalee’s depression, all suffered and worsened…

Our entire lives were consumed just trying to survive every day. Which sounds crazy when you realize we're talking about a 12 year-old kid, but that's how it was.

I desperately, desperately wanted foster care to work. Probably more than I should have. I’d been visiting and mentoring M for years, I knew what kind of problems he had. I really thought we could be the home that succeeded for him where so many others had failed. However, I could have prevented a lot of pain for my wife if I’d been willing to open my eyes and ears sooner.

Don’t worry, all hope is not lost for M. I still see him every week, and my wife comes too sometimes. We took him to Incredible Pizza for Christmas. His life is not over; he’s doing fine, and I’m hopeful he’ll find a good-fitting family sooner rather than later.

In the meantime, I have reverted back to the role of mentor, and I intend to continue in that role as long as I can.

My Grampa – my dad’s dad – had always been very fit and active. Even as an 80+ year old man, he continued skating and biking, competing in at least a inline marathons every year. He still drove the school bus for the elementary school.

The second to last Sunday in July, Grampa woke up confused and disoriented. At the hospital they discovered bleeding in his brain. They tried two surgeries, both unsuccessful. He passed away later that week.

It was a surprise for everyone that Grampa passed first because Gramma was the one who’d had multiple heart attacks and several resulting heart surgeries.

In August, the month after Grampa passed, my sweet Gramma was getting ready to move into a senior homestead. The night she arrived, her chest started hurting and she was taken to the hospital. Another heart attack, this one the last.

Fortunately my two aunts were with her; the three of them recited Psalm 23 together in the ambulance on the way to the hospital, Gramma’s favorite. She was in and out of consciousness until she passed away a few days later. 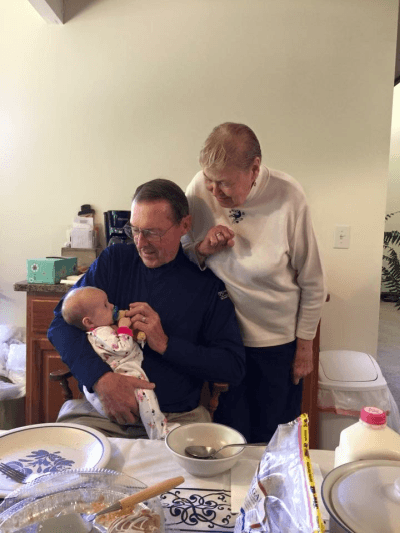 Ted & Faye Waldo (I call them Gramma and Grampa) holding my daughter, Eden... This was taken a couple years ago.

My Grampa said one time that he hoped he would go first, because he didn’t think he could do it without Gramma. God granted him his wish, and did him one better: they were apart just barely more than a month.

As an aside that I have to make, I’m so proud of my dad – he lost both his parents suddenly-but-separately over the course of just barely a month. Despite that, he took charge of managing the estate and made sure things were done right, the way Gramma and Grampa would have wanted. He’s been a pillar of dependability for his brothers and sisters.

#3. Learning to Help My Wife In Her Depression

Underlying all of these events were Kalee and I’s journey through her depression.

I could not, for the life of me, figure out how to support her in a way that actually helped and encouraged her. Everything I tried over the course of several months seemed to make things worse.

Kalee’s emotional and mental struggles were initially labeled as postpartum depression because many of her episodes seemed triggered by parenting. They also seemed to start up around Eden’s birth, and to restart again following M's entrance into our home.

However, if you go by the book, postpartum depression doesn’t last as long as it was lasting for Kalee. It’s supposed to be months, not years, even if it does come back after every child.

Perhaps a deeper clinical depression was awakened by PPD after Eden’s birth. It may have been there all along and not shown itself. Who knows.

Whatever you want to call it, it’s been beating us down for most of the past two years, and it really came to a head this year during the foster ordeal. For the first time in my married life, a problem felt out of my league. I didn’t know what to do. This led to me seeking help from a counselor for the first time in my life.

I finally landed on a strategy that seemed to legitimately empower Kalee, and I’ll talk more about that in another post, but it took a lot of failed strategies to get there.

As I said at the beginning, things are much better now than they were at the beginning of this year - for both of us - but depression is not something that goes away quickly or easily.

Conquering depression is a labor. A process. And there’s no guarantee it’ll ever completely go away, but it will get better.

It’s probably no surprise that I failed to meet most of my personal and business goals for the year 2017.
If you look back at my post from the beginning of the year, I stated 5 clear goals for the Haven:

If I were to grade my year based purely on goals accomplished, it would score 30%... I met one out of five major goals, and two smaller side goals. That’s a big fat F minus minus.

I wouldn’t call this year a failure. Not now that I’m looking back on it.

There is a proverb that’s been on my mind a lot lately. I found it randomly in the book of Proverbs one day. It is this:

The crucible is for silver,
And the furnace is for gold,
But the LORD tests hearts.
- Proverbs 17:3

The word “tests” here isn’t like how you take a test in school. Think “tests” like the way that a blacksmith tests metal… Purifying, improving, and shaping it until it matches his original image. I know not all of you reading this are Christian, but this is a personal update, and this year has been very much a faith journey for me; a refining of the soul.

There were some very dark days this year, some weeks where I drifted, where I was angry with God.
But…

At the end of it all, I am better.

There is less pride in my heart. It has been replaced with more love, more patience, and more discipline.

I am a better husband, father and man today than I was a year ago. My marriage is better. My family is stronger. The future looks brighter. I can say these things with confidence.

I wouldn’t go back and do it again - I’m ready to be done with 2017 - but I know that every step along the way played a part in bringing me here, and I’m grateful for where I am.

You can now consider 2017 officially wrapped up. I know there wasn’t much in the way of marriage advice here; I’ll get to that next time. I mostly wanted today to be an update for those of you who care (thank you!).